The Chowan County Center is closed to the public; staff are available by phone or email for assistance, (252) 482-6585.

Find this article at:
go.ncsu.edu/readext?510327
— Written By Steve Gabel

Designed to provide entrepreneurs research-based technical training in the fundamentals of aquaponic technology. This State-of-the-Art short course will showcase techniques and practices that are being used at one of the largest commercial facilities in the U.S. If you are considering getting into this fast growing industry, you won’t want to miss this opportunity to hear from the best.

About the course: Aquaponic systems are becoming increasingly popular, and more people are finding innovative ways to produce more than one crop in their recirculating systems. Aquaponic systems are recirculating aquaculture systems that incorporate the production of plants without soil. In typical recirculating aquaculture systems, the goal is to produce large quantities of aquatic biomass in small amounts of space and small volumes of water. In such a system, waste products can accumulate if not physically removed or otherwise filtered via mechanical and biological means. The organic buildup and metabolic byproducts can be reused in aquaponic system by a secondary crop; plants. Plants can grow rapidly with dissolved nutrients that are excreted directly by the aquatic species or generated from the microbial breakdown of the animal waste by the various species of bacteria in the system. In closed recirculating systems with very little daily water exchange, dissolved nutrients accumulate in concentrations similar to those in hydroponic nutrient solutions. These dissolved waste nutrients are taken up by the plants, reducing wastewater discharge to the surrounding watershed and allowing for more efficient use of the fish feed.

We are pleased to have leading NC commercial aquaponics experts from the facility at Lucky Clay’s Fresh to lead the presentations. Aquaponics Farm Manager Bradley Todd joined the team at Lucky Clays Farm in 2010 and began

managing Lucky Clays Fresh in 2013. Todd was raised in Aquadale, North Carolina and spent five years in the Marine Corps. After completing service, he received a Bachelor of Science Degree in Geology and Earth Science from the University of North Carolina at Charlotte. While overseas in the military, Todd began his research in the fundamentals, engineering, and science of aquaculture and hydroponics, which ultimately lead him to learn about the process of combining the two into an efficient and sustainable farming system. Todd intends to incorporate bio-floc technology, Vermiculture, and mycology into an all-encompassing production flow with Lucky Clays Fresh’s established Aquaponics system.

Huy Tran is an aquaculture and aquaponics expert with more than 20 years experience. After graduating with a degree in agriculture/aquaculture from the University Of Hawaii, Huy worked at and managed several area farms rearing Shrimp and numerous M 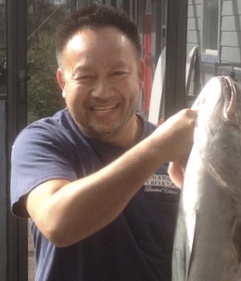 arine/Freshwater fish species. This included managing a 20 acre farm producing 47 different aquatic species used in aquatic toxicology testing. In 1997 he began work at Aquatic Eco-System (AES) where he remained for 19 years. As Sales and Marketing Officer, he was responsible for production of 16 of the AES master catalogs and oversaw all technical sales and all marketing for the company. Currently, Huy owns his own facility, Apopka Aquaponic Farms, and consults/designs for many aquaponic and Aquaculture facilities worldwide.

Registration for the Aquaponics Short-Course includes a morning coffee break, a lunch, and afternoon coffee and soft drinks. A short-course workbook is also included in registration. Register online for Aquaponics