Find this article at:
go.ncsu.edu/readext?731335
— Written By Katy Shook

(Image Below)  After years of a mostly pest-free existence, crape myrtle trees have started to succumb to nature’s system of checks and balances. Overplanted because of their beautiful performance and appearance, crape myrtle trees are not native. They have, however, become a symbol of southern gardens. Unfortunately, problems are becoming more frequent with the species, and local gardeners are likely to notice.

Originally, powdery mildew and aphids were the main concerns for crape myrtles. Powdery mildew, which is a disease, would leave the leaves coated with a white residue; but with breeding, the problem was minimized. Aphids were notorious for excreting a sticky residue that attracted other insects and/or a black sooty mold growth, but again, the problem was mostly phased out.

Within the last decade, gardeners began to notice crape myrtles thinning out mid-season. Experts determined this was a response to weather extremes; periods of heavy rain followed by excessive drought. The condition did not affect all crape myrtles, as some continued to thrive while others were bare. Cool weather and fall rains usually helped the condition improve.

Now, a new pest exists. During the early 2000s, entomologists announced the presence of a new insect, crape myrtle bark scale (CMBS). By the mid-2010s, CMBS had spread across southern states and was present in North Carolina. As the pest continues to spread, gardeners will likely begin to notice it in their own backyards.

Crape Myrtle Bark Scale (CMBS) is an insect that is noticeable as a white or gray, waxy crustation on stems, large twigs, and trunks. As it feeds on the tree, the insect produces copious amounts of waste (also known as honeydew). As a result, the leaves, branches, and trunks become covered with black sooty mold, which grows on the honeydew. CMBS offspring usually spread in the spring and summer. Although the pest is not likely to kill the tree, it can reduce the performance and vigor.

To help control CMBS, gardeners have several options. First, inspect trees regularly. After CMBS is observed, gardeners can mechanically control the pest by removing the insects with a gentle scrub brush or strong stream of water. Several pesticides, organic and synthetic, are available for control. Contact type insecticides (ex. horticulture oils) can be applied year round; follow all label directions. Systemic type insecticides (ex. drenches) are best applied in the spring when the plant is active but not in bloom so as to avoid harming pollinators. Follow all label directions and continue to monitor for re-infestation. It is important to remember that a diversified, well-managed landscape will help culturally reduce pests. 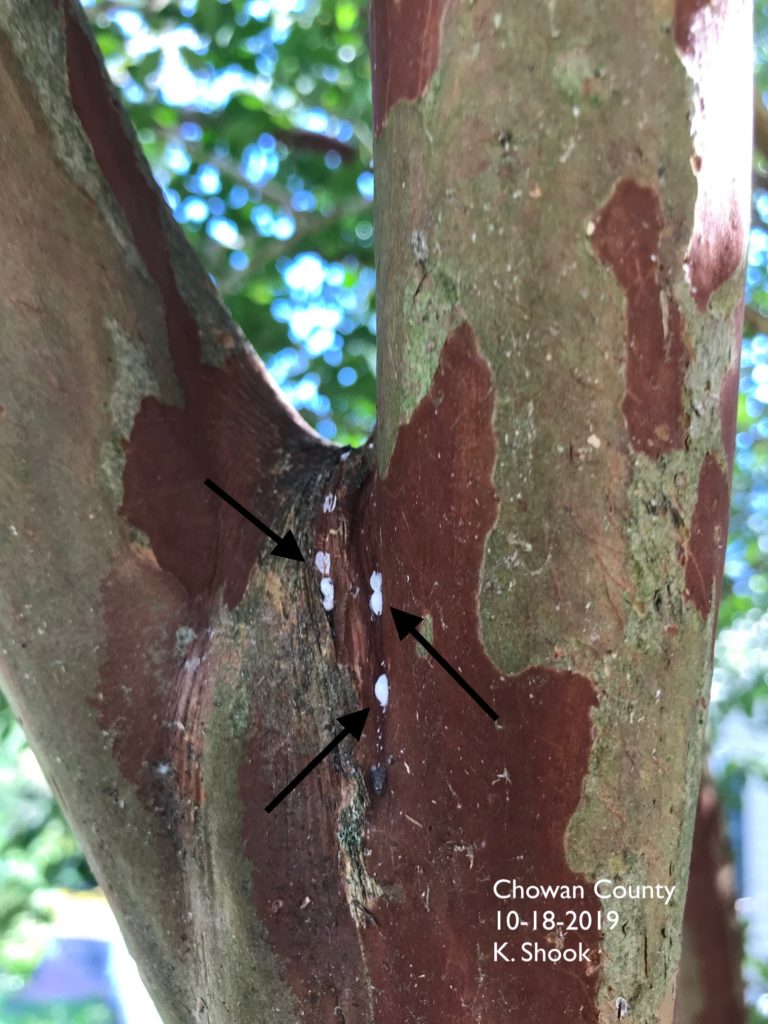